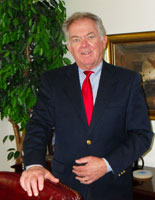 James R. Chandler, III graduated from the University of Florida School of Law with honors in 1975 including admission into the Florida Chapter of the Order of the Coif. Prior to his graduation from the University of Florida Law School he graduated from Culver Military Academy in 1968, attended Duke University for three years and thereafter graduated in 1972 with a Bachelor of Arts Degree from Florida State University. After admission to The Florida Bar in 1975 he was employed by the downtown Miami firm of Nicholson, Howard, Brawner and Lovett until he and former Senior Partner Don Nicholson, and Harry Bender formed Nicholson, Bender & Chandler; such firm being the precursor to the establishment in 1981 of Bender, Bender & Chandler, PA with offices in Coral Gables, Florida. In 1996 the firm opened a branch office in Sarasota which office has since 2008 been located in Palmetto, Florida, in which James Chandler is the resident partner. Mr. Chandler, as are all members of the firm, is an “AV” rated attorney by Martindale Hubbell and he has been so rated since 1986. His principal areas of practice include commercial and business transactions and litigation with a significant emphasis in the hospitality industry and in addition thereto real estate, probate and trust law practice as well as litigation in those areas. In addition to being a member of The Florida Bar since 1975 he is admitted to practice in all Federal Courts of the State of Florida (Southern, Middle and Northern Districts). Mr. Chandler is a native Floridian, having been born in Daytona Beach, Florida. He is married to the former Terry Drake of Coral Gables, Florida and they have an extended family of three children and six grandchildren (with a seventh on the way). He and his family enjoy tennis, snow skiing, traveling, cooking and gardening.